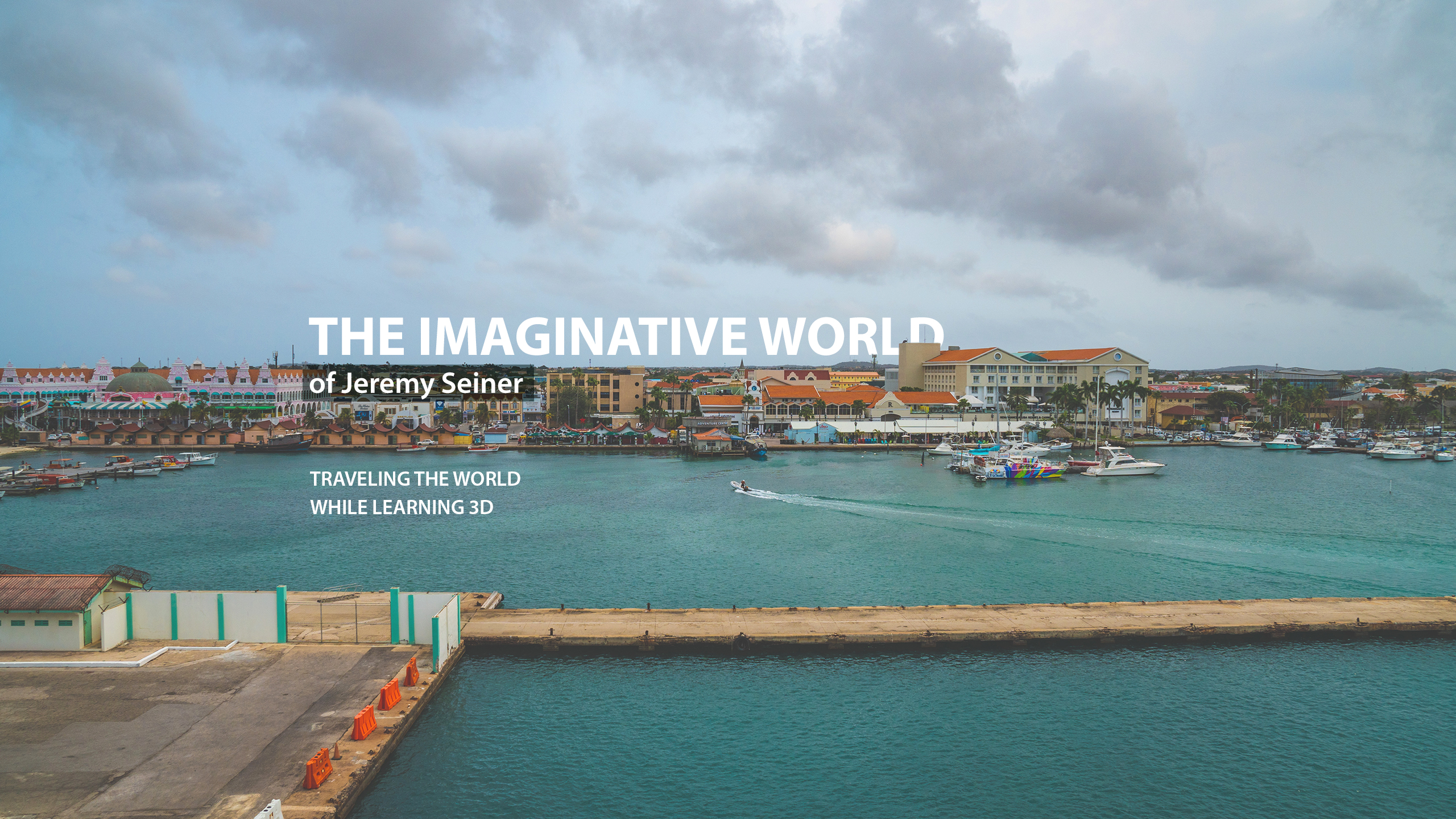 By Jeremy SeinerAugust 17, 2019No Comments 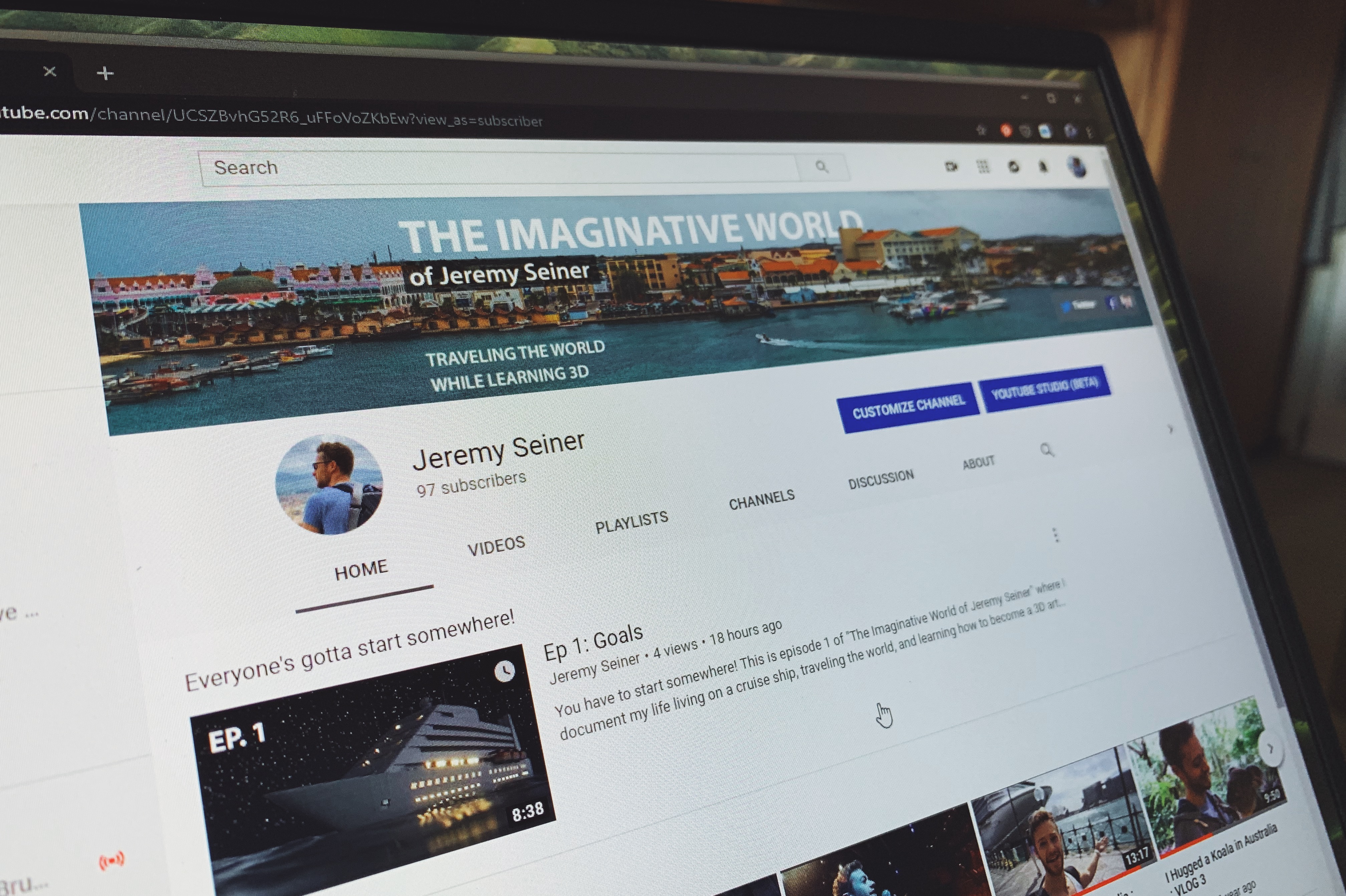 I’m so excited to announce that episode 1 of my new series “The Imaginative World of Jeremy Seiner” is now live! It’s a bit surreal seeing its thumbnail on my YouTube channel. I learned so much in the process of making this video. Actually, it’s a bit more like two videos because I made a prequel – the cabin tour.

As I mentioned before, this is the year of “doing” and that’s what these two videos are all about. The cabin tour video had let me start with the simplicity of filming a video with a single goal: show the world what my room looks like on a cruise ship. It had one visual effects shot where I established the ship, zoomed into the porthole revealing my room, and then having me pick up my GoPro to start recording. It sort of “tested the waters” on what kind of workflow I’m developing to churn out videos with increasingly more complex visual effects shots.

Getting my feet wet

Like anything at the beginning, it was slow going. That one shot took days to create, render, and composite. But what I learned in the process helped me accomplish the many 3D shots I did in episode 1. And, I was able to more efficiently accomplish them in less time. That’s the name of the game with these videos. Learning the craft through experience.

What’s more interesting is that the 3D part of the video wasn’t the most revealing aspect of what I needed to learn. After editing my GoPro footage, I struggled with correcting the exposure whenever I was in the foreground and my portholes were in the background. It just looked like a muddy mess. So, I decided to dedicate an entire part of episode 1 to what I learned.

One thing lead to another and all of a sudden I was recording voice-overs and texturing an old-style television to showcase my point. The pipeline started to get more clear. First I have an idea and I write it out like a loose script, then I start recording the narration, then come the film and visual assets, the 3D rendering, compositing, grading, and finally – the music.

I’ve always wanted to score my videos. That is one of the main pillars of my channel – every video features original music. The cabin tour has some fun genres in it. The first scene has a quick orchestral score followed by a small “big band/jazzy” arrangement. Then the main bulk has this ethereal techno vibe. When I wrote it, I wasn’t sure what that sound was going to do to the mood of the video. And to be honest, I’m not quite sure if I’m 100% down with it. But, if I continued to be unsure and picky, nothing would get uploaded.

Episode 1 has more of a consistent tone to it. I really like orchestral arrangements. I think that’s going to be my style for the majority of my videos. I listened to a lot of soundtracks growing up, and I can attribute a lot of my musical taste to them. I can’t wait to see how my arrangement and composition skills grow along with the visual ones.

Laying the ground work for the pipeline

I realize I’m combining a lot of metaphors here. Episode 1 is very much a prototype. It’s my first stab at producing the vision I have in my head. The camera angles, the editing, using the GoPro as a way to convey my thoughts and feelings… it’s all something I have to refine.

One major aspect I need to work on is timing. Editing has a subtlety to it that I didn’t pick up on until I started making videos. As an editor, I have the ability to take all of the footage I’ve recorded and cast whatever mood I’d like onto it. The more I understand timing, the smoother the video will flow.

If I could sum up everything I’ve learned in creating episode 1, I’d say that I better understand the production pipeline. By this I mean the process of going from idea to finished product or usable assets. A “game development pipeline” for creating a character might look like this: Draw a concept sketch, sculpt it in 3D, retopologize the geometry, lay out UVs, texture, rig, animate. I’m learning to create my own pipeline so that I can learn, grow, and most importantly – produce content consistently.

I want to add every digital thing I create to my collection of reusable assets so that in turn I can increase the complexity and detail of everything further down the line. That also means that I need to carefully pick and choose what I’m creating and in what order.

My first tutorial! That’s right! Finally! In addition to a new episode, I’m also going to create my first Cinema 4D tutorial. I’ve got a vision on what kind of learning content I’d like to create. The best tutorials teach people why in addition to the how. Not just “click here, then click here, then click here…” Making a great tutorial for YouTube is no easy task, so with everything else, the more I do the better I’ll get.

That’s all for now! Thank you all so much for watching!