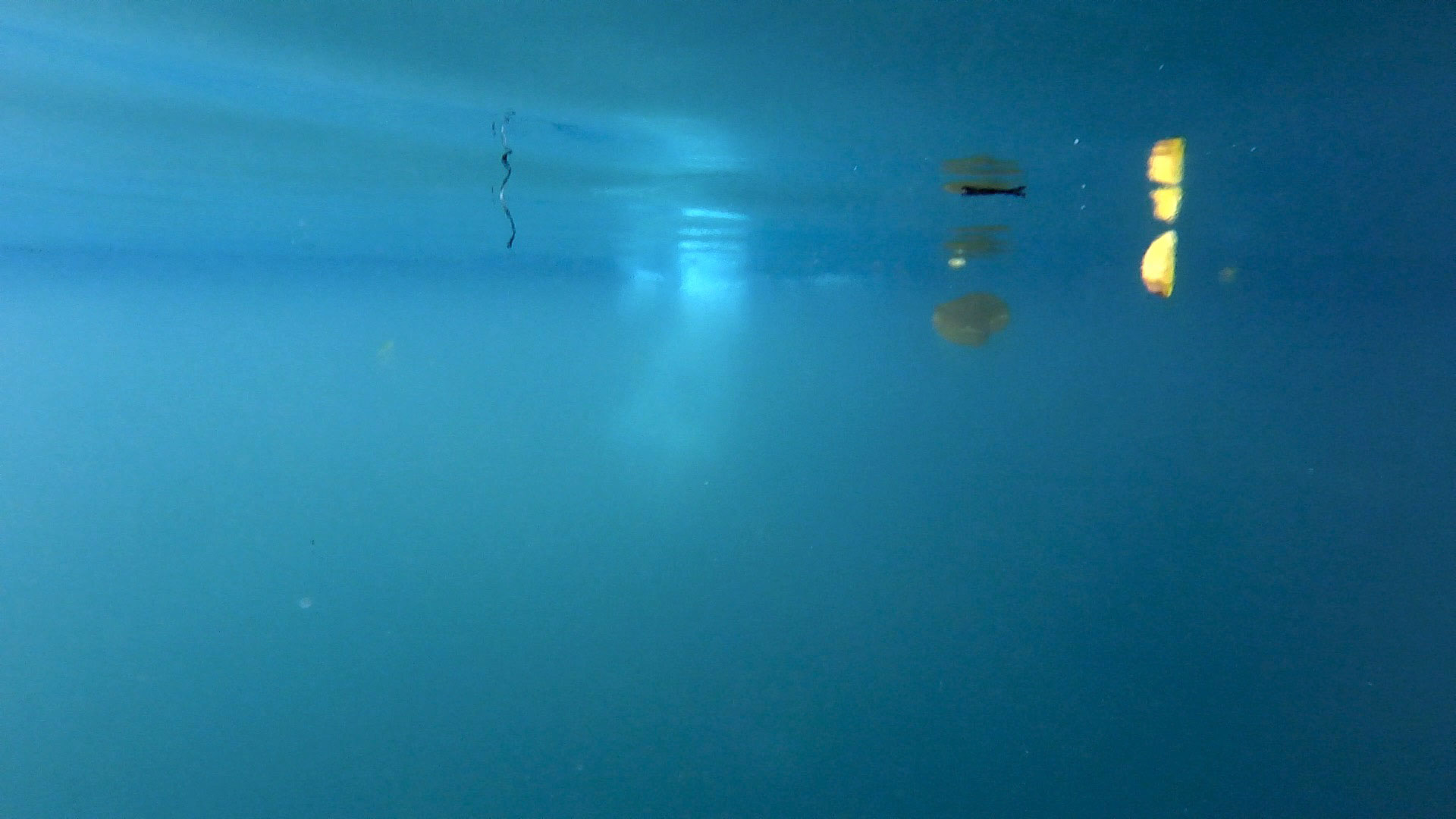 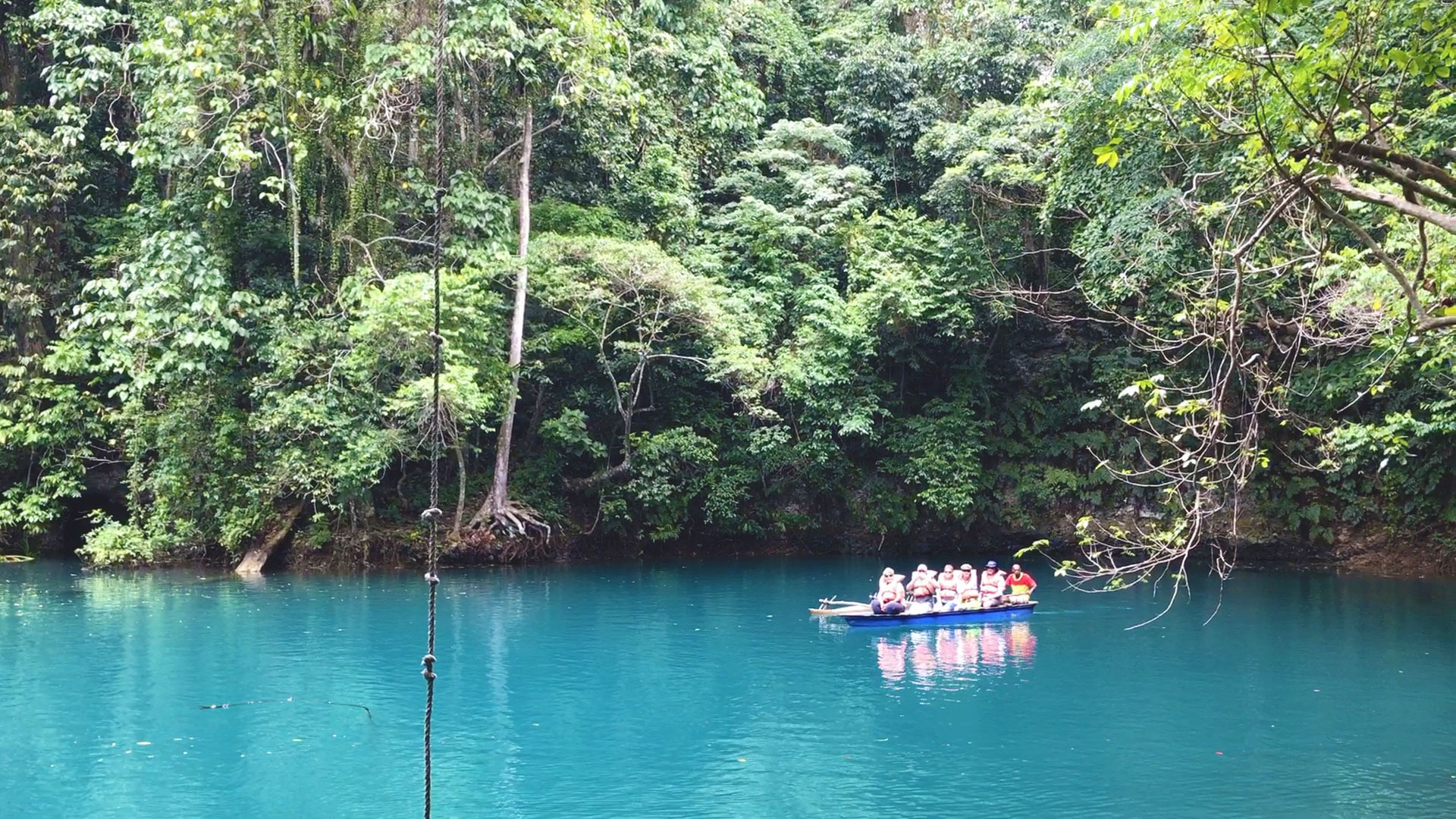 I have never imagined water could be that blue. It was like someone dumped an ocean of icy-blue Koolaid into a giant hole in a forest… with a rope swing. That was The Blue Hol in Vanuatu.

It started off with the strangest turn of events traveling to the location. I and a majority of the cast haggled for a local taxi and entered a medium-sized van. We started traveling up a hill towards what we thought was our destination until the cab driver pulled over. “Time to get out”, he exclaimed. We were all like, “…what?” We couldn’t possibly be there already. It had only been five or so minutes since we left the ship. 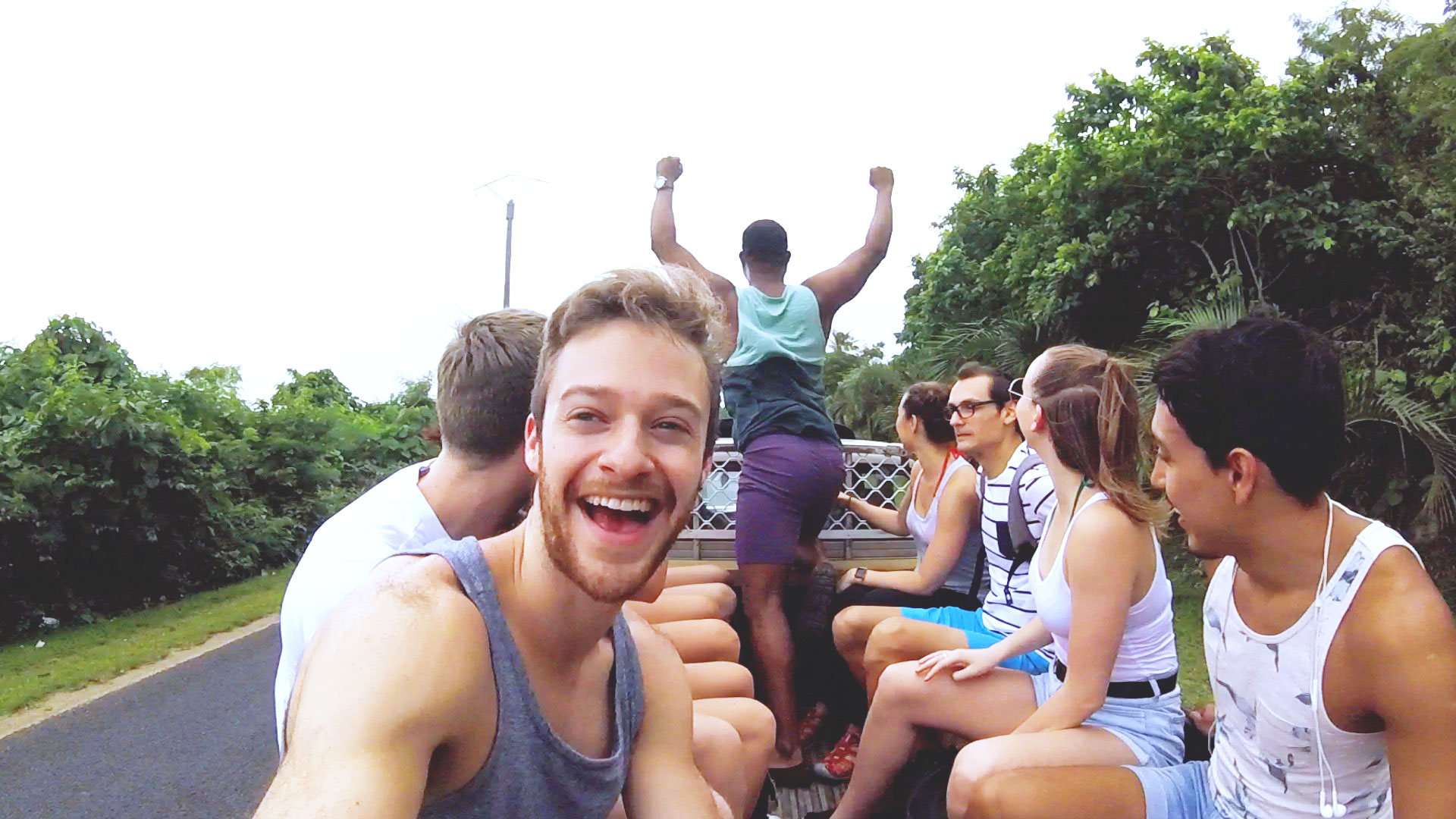 “You will join my cousin for the rest of the trip”, said the driver. He was pointing to an open-bed 4×4 truck. He couldn’t be serious. He was. Inside the back of this truck were a couple wooden crates nailed together sitting loosely inside. In we went.

At first we were all pretty nervous sitting in the back of a random truck on an island in the middle of the South Pacific, but after 15 minutes of travel to Bhutan, we got the hang of it. It actually felt pretty nice. The weather was slightly cloudy with a cool breeze. Before we knew it, we were there.

The setup was simple. It was a moderately dense forest with a few hills. A maintained, dirt footpath lead us further down into a valley and there it was. The water immediately looked almost fake. It was as if someone took a picture of water and oversaturated the image. Multiplied by four! 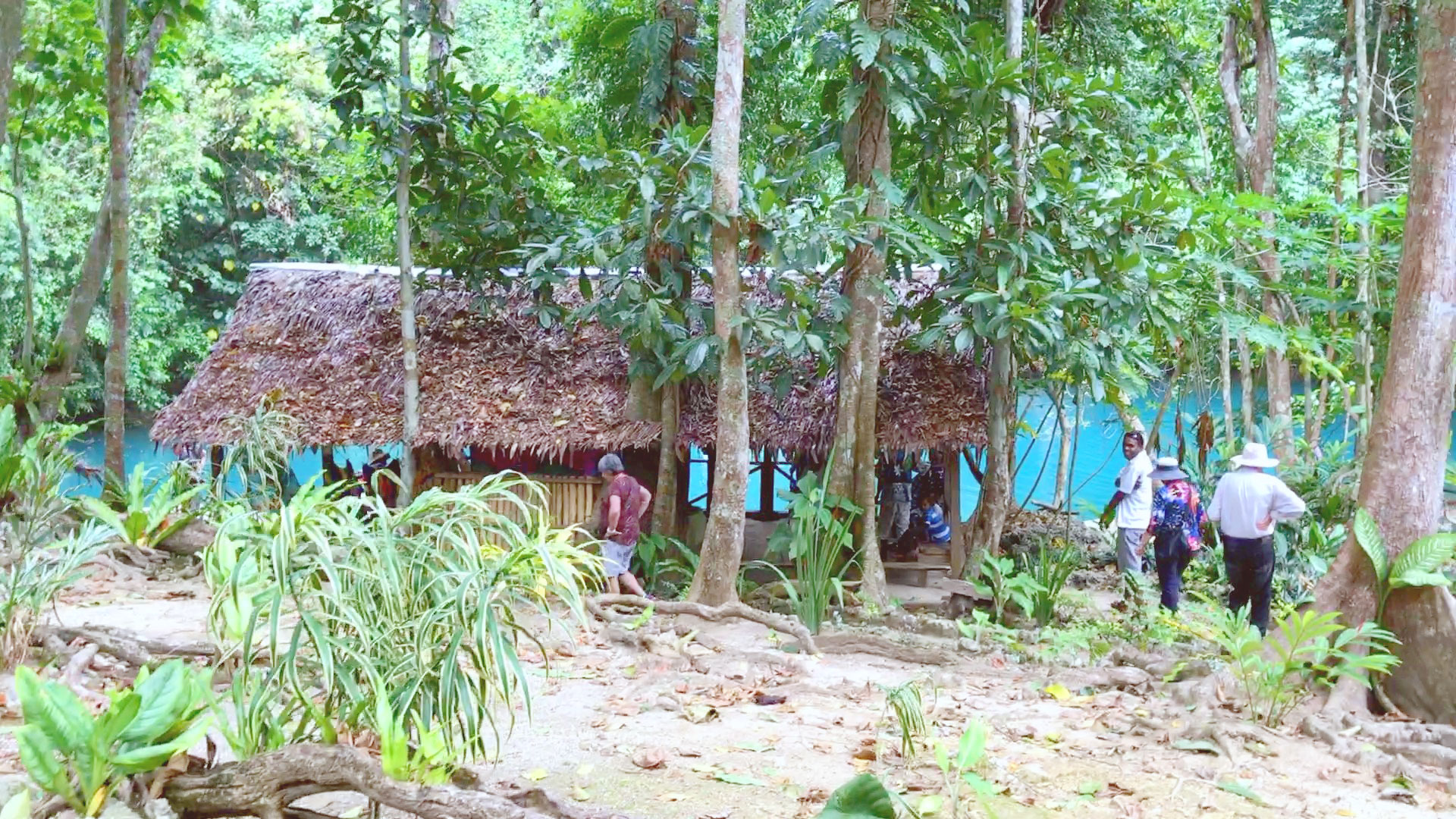 The hole couldn’t be more than 60 or 70 feet wide. In fact, instead of a hole, it was more like the end of a lake because it wasn’t circular. The left end of the area opened up to the rest of the lake where people could get a brief boat tour. But enough about that, let’s talk about the main attraction.

The rope swing. In fact there are two! But the main one was at the far left end of the area. Here there were two flat rocks on top of each other creating a preparation area for the run into the jump. As we stashed our stuff there, we found an extremely long stick with a branch on the end that conveniently caught the rope dangling from the tree above.

I’ve only swung off of a tree into a lake once before. And I really enjoyed it! I remember doing it with my friends and that memory is really precious to me. Now that I get to do it with this amazing group of people, I was overjoyed. Just one breath, a leap, and don’t forget to let go at the end!

The water felt amazing! Seeing as it was mostly overcast with a bunch of trees over our head, I’d say the water was even a little warm. Once a few of us jumped in, the rest followed. Just enough thrill seeking after months of normality at sea. 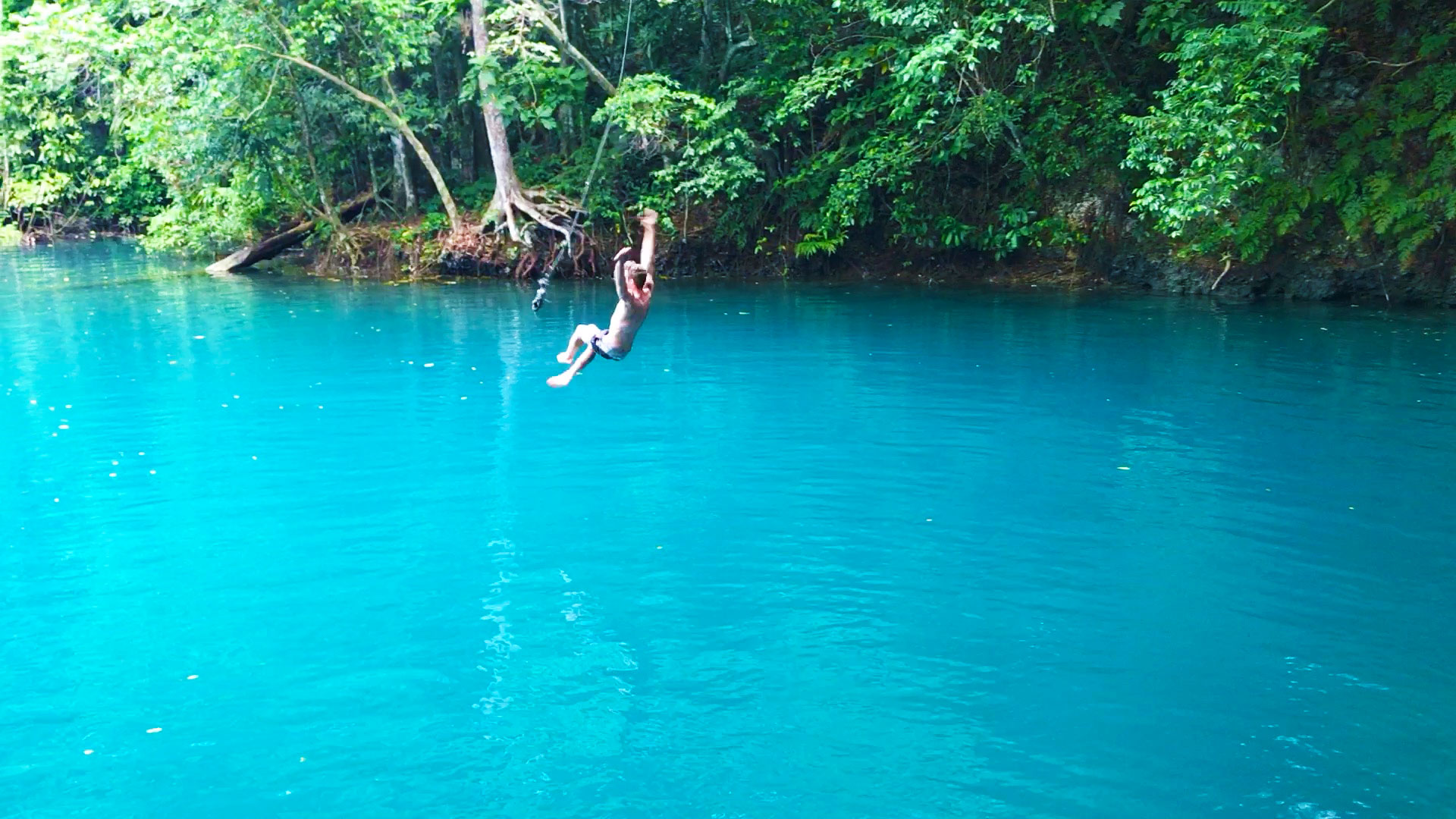 I had this shot in mind for my vlog where I held my GoPro while swinging. A pretty normal shot for a GoPro right? Well, I didn’t take into account the fact that the rope itself was pretty slippery. As I jumped, I ended up slipping a little, and put way too much pressure on my index finger. The top pad and fingernail ended up getting a little sprained and felt a little warm after jumping. Luckily it wasn’t anything too bad. Just annoying as I couldn’t put very much pressure on it for a couple weeks.

We weren’t done. Sure we had a little thrill-seeking, but now we were ready for the beach. Vanuatu has a lot to offer even though it might not be obvious at first glance. We had talked to our taxi/truck driver earlier, and he had mentioned a beach and resort close by. We thought, “Yes please!” and went for it. Boy were we glad we did.

10 or 15 minutes down the road appeared this resort. As soon as we walked in, we saw the most amazing beach view. I just couldn’t get over the water. It wasn’t necessarily the same blue as the Blue Hol, but if I saw the ocean like that, I’d be a little afraid. This was different. It was gorgeous! A vast flat, clear, sparkling vista. The resort had a restaurant that hung over the water. Here, we got the biggest coconuts I’ve ever seen. They were just enormous! And the water inside was exactly what I needed after our rope swing adventure. Refreshing.

We had our choice of pizzas – meat-lovers or Hawaiian. I shared a meat-lovers and boy was it packed. Multiple kinds of meat on a very slim crust. Very unique. Gosh, just writing about it makes me want another.

There were a few market-like tents around the front of the resort. I got a small bracelet. I’m thinking about wearing some bracelets like these. They’re fun momentos and reminders of how times like these are so special. I’m never going to forget this experience. The water, the rope swing, the coconuts, the vast vista of clear, blue ocean… It was bliss.

Check out my vlog about our experience!